The Quaife torque biasing differential enables your car to accelerate quicker and corner faster. How?

By getting the power to the ground!

In drag-race style, straight-line acceleration runs, this results in a close to ideal 50/50 power split to both drive wheels, resulting in essentially twice the grip of an ordinary differential (they don't call open differentials "peglegs" for nothing).

In cornering, while accelerating out of a turn, the Quaife ATB Differential biases power to the outside wheel, reducing inside-wheel spin. This allows the driver to begin accelerating earlier, exiting the corner at a higher speed. 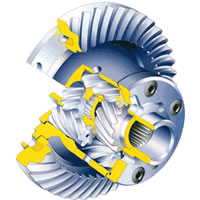 Every Quaife ATB Differential comes with something else other's don't have: a Limited Lifetime Warranty. This warranty applies even when raced!