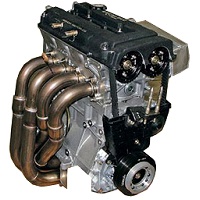 The B-series Honda DOHC engines are the most popular and well known of the Honda engines. The B18A, B18B and B20B platform is non VTEC camshaft design. First introduced in Japan back in 1986 in the Honda Accord, the B18A made it's USDM debut in 1990 as the B18A1 found in the Acura Integra RS/LS/GS and remained until 1994 when Honda/Acura released the B18B1 for the 94-95 Acura Integra RS/LS. The Acura badge is only used in North America. The Honda B20B used in the CR-V chassis employs the same cylinder head and camshaft package, but has the larger 84mm bore size to increase overall displacement.