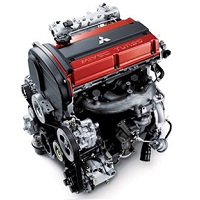 The Mitsubishi two liter, turbocharged variant of 4G6 Series is probably the best known Mitsbishi engine ever produced. 4G63T or generally referred as 4G63 was introduced in 1988 with JDM Galant VR-4. The cast iron block was housing 4 cylinders and 1997cc displacement was achieved by 85 mm bore x 88 mm stroke. The head was featuring Dual Over Head Cams and 4 valves per cylinder. TD05H-14G turbocharger was coupled with a front-mount air-to-air intercooler. This first version had a compression ratio of 7.5:1 and was delivering 200hp at 6000RPM. Mitsubishi continued to use it in Galant VR-4 until 1992 with minor changes. The final version of 4G63T used in Galant VR-4 was rated at 240hp thanks to a slightly bigger turbocharger.