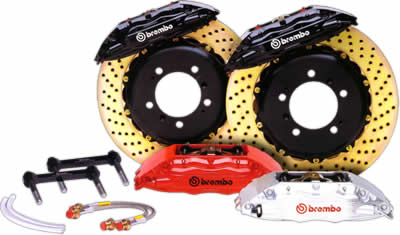 The Brembo Gran Turismo High Performance Braking System offers significant advantages over the OE manufacturer's system — advantages far beyond what's simply known as "big brakes". As the braking system's primary function is to dissipate heat, larger, more sophisticated discs are used in order to increase the fade resistance of the system. These discs are directionally vented for enhanced cooling, as well as drilled or slotted for improved consistency, continuously cleaning and refreshing the pad surface.

In most applications, a two-piece "floating" disc assembly is used, with a cast—iron disc specially mounted to a billet aluminum hat. One of the advantages of this type of construction is reduced weight. By making the center-section of the disc out of aluminum, a great deal of weight can be saved in a key location, as it is both unsprung and rotating. The greatest advantage, however, lies in the float itself. The brake discs must cope with extreme temperature levels. In the case of a non-floating disc, thermal stresses develop which lead to warping of the disc and cupping of the braking surface. With the full floating system, the disc is free to grow relative to the bell, and can remain straight and true.

On nearly all the vehicles for which there is a Gran Turismo system available, the OEM caliper is of a sliding design, with the piston or pistons on only the inboard side of the disc. While this type of caliper is inexpensive to manufacture, it is generally extremely heavy, and inherently flexible, both of which are to be avoided on a performance braking system. Conversely, Brembo's calipers are fixed mount, opposed piston calipers cast from aluminum alloy. Despite being much larger and many times stiffer than the original caliper, they are also much lighter. The calipers are equipped with differential piston bores in order to eliminate pad taper. Without this feature, the leading edge of the pad will wear more quickly. This can cause problems such as cocking the pistons in their bores, which can damage or seize them.

The net result is a braking system, developed specifically for each vehicle application by Brembo's immense technical resources, that insures high quality as well as high performance.